Were does the time go.  I had planned on posting the items I worked at retreat later in the week, and before I know it a couple of weeks have past.

Anyway here is what I worked on that weekend.  I started a new project.  there nothing more fun than staring something new. I know some people would say finishing, but if you look around my sewing room I defiantly like starting better. 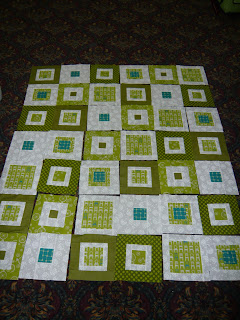 This one will be a wedding gift, but I have lots of time the wedding not until 2014.  I knew that the bride loves green and white so decided to make a modern square in a square quilt using 4 greens, 1 blue and 1 white.  I completed the blocks but think I will put this away for a bit.

I also took a few Farmer wife blocks, I had per cut but this didn't work the best for me as I had made a couple of cutting errors so only finished 2 blocks at retreat.  Once I was home I able quickly finish the cutting I needed and finish 2 more. 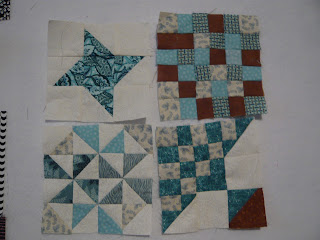 I had a mental block on my flower quilt, I think it had sat in the same state for over a year.  I got a block on the applique border. So I was able to add the plain border that goes before the applique one, and then with a little help for one of the ladies get past my metal block and start adding the steams.  Not sure why this was such a block but am happy to be past in now. 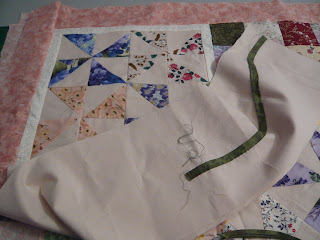 I have not done much sewing since I have been back, the last couple of weeks the weather turned nice and I have been busy outside.
Posted by Floss at 11:52

I like starting too! lol. Love your new project, green is my favourite colour. The Farmer's Wife blocks are wonderful.

Floss
I started quilting in 2002 and this blog was going to be about quilting, and most of the time it is. But between work, husband (DH), young daughter (Little Miss) and life I don't get as much quilting time as I would like, so some of that stuff is on the blog too.